We’re delighted that our InsurTech client Inshur has completed their Series A just before being featured in prestigious high-growth list Oxbow Impact 25. 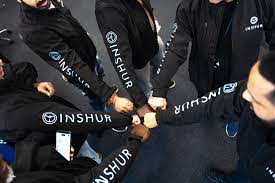 InsurTech is one of the rising stars of the UK Startup scene. Investment in the sector reached new heights in and judging but the outlook so far, 2019 looks set to be even higher. We’re delighted that one of our clients Inshur is living proof of this trend, having completed their Series A in February, just before being featured in a prestigious high-growth list by Oxbow Partners.

Launched in New York in 2016, Inshur provides professional drivers with a TNC (Transportation Network Company) license, in as little time as it takes one of their customers to request their cab through an app.

When celebrating the company’s first birthday in June 2017, one of Inshur’s Founders summarized that:

“We are witnessing a new era, focused on removing the friction from manual processes and putting customer-centric thinking and technology at the centre of the experience. From these forces, the #insurtech industry has arisen.”

In November 2018, Inshur moved its headquarters to the UK and settled in Brighton. By then, the app had already managed to sell a policy in the record time of 117 seconds (yeah, that’s under two minutes!)

Earlier this year they closed their Series A investment round, which secured them $7m with a $2m credit facility, led by Munich RE HSB/Ventures and MTech Capital. Only a couple of weeks later, they were featured in the Impact 25 list, curated by Oxbow Partners, a management consulting company specializing in insurance providers. In a statement on their website they wrote:

“There are many lists and landscape infographics. What really matters is identifying the winners. Members of Oxbow Partners InsurTech Impact 25 have achieved revenue growth, and have a technology-led proposition that can transform incumbents or the insurance industry as a whole.”

And in reaction to their win, Inshur said: “As an ambitious, young and fast-growing business, we are humbled by such recognition. The team on both sides of the Atlantic have worked tirelessly to get us to where we are and are the secret to our success. It is a fantastic start to the year for us to be identified as one to watch in the #insurtech space.”

We’re really proud to work with Inshur, so congratulations to them on such a great start to a promising journey.