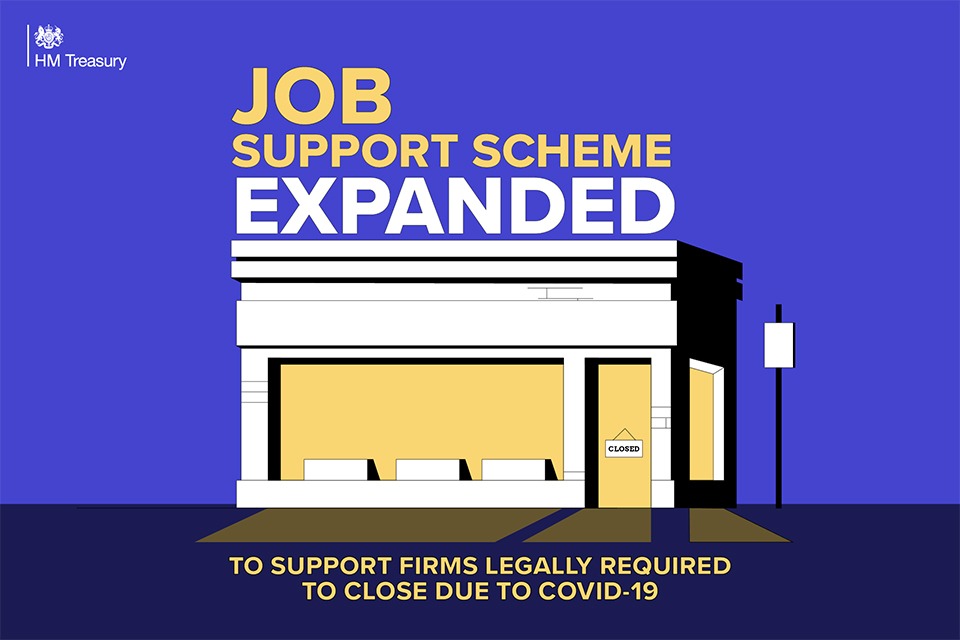 One month after announcing the Winter Economy Plan, the Chancellor Rishi Sunak announced an enhancement of the Job Support Scheme in order to help businesses face decreased demand as a result of tighter regional restrictions.

How does it work?

Under the Job Support Scheme, businesses who are NOT forced to close can claim up to 61.67% of their employees’ unworked hours, up to a max of £1,541.75 per month, provided that:

So for example, an employee who normally receives a salary up to £3,125 a month, working only 20% of their hours will still receive 73.33% of their usual wages, distributed as follows:

Business who find themselves in areas under Tier 3 restrictions, and are legally required to close, the Government will cover 2 thirds (66.67%) of the employee’s usual wages, up to a max of £2,083.33 per month.

The employer is still expected to pay NICs and the minimum pension enrolment contributions on behalf of the employees.

As the Scheme is designed to sit alongside the Job Retention Bonus, if said employee is brought back from Furlough in November until the start of February 2021, their employer will also be eligible for a grant worth £1,000 per employee.

The Job Support Scheme will run from 1st November for the following 6 months, until the end of April 2021. Notably, the Scheme is available to all UK Businesses, including those who haven’t previously used the Job Retention Scheme.

The Chancellor has stressed that the Scheme is open to all UK employers with a PAYE payroll as of 23 September 2020.

Any employees who were on payroll as of that date are eligible, including those who were subsequently made redundant and then re-hired before the new package was announced.

The Scheme is mainly open to SMEs, meaning that large companies with over 250 employees need to pass a financial impact test in order to be eligible, and face restrictions on dividend payments if they benefit from the Scheme.

There are no other qualifying criteria, but the rules of the Scheme include some key requirements such as:

Businesses who claim the under the Job Support Scheme are still eligible for the Job Retention Bonus, provided that they hire back furloughed employees and pay them at least £520 per month from November to January.

Crucially, grants under the JSS count towards the lower threshold for the Job Retention Bonus.

How to claim under the Job Support Scheme

Employers will be able to claim under the Job Support Scheme starting on 8 December 2020 through Gov.uk.

The first claim can cover salary from pay periods ending and paid in November, with successive payments following a similar pattern where claims are made in arrears at the beginning of the month after the one that the claim refers to.

Detailed guidance from HMRC is still to be published at the time of writing.